skip to main | skip to sidebar


As in the drafting of the US constitution and the Treaty of Versailles, the manner in which wealth is being divided is now done in such a way as to ensure endless litigation: drawn up in extraordinarily involved and deliberately complicated language which, under the pretense of being fair to all, would force them instead to tear each other apart; since you can't take it with you, you may as well die with the consolation that the nations' treasures will poison the lives of your heirs; the only drawback being you will be deprived of the pleasure of watching your family scratching each other's eyes out to claim a share of a fortune built up over a lifetime that has, unbeknownst to them, dwindled to a pittance in the blink of an eye.

An invisible gas, accumulating with each rig drilled in the vast shale deposits of the continental United States has been flared, piped, collected, frozen, pressurized, encapsulated in floating bombs that have proliferated around the globe to bring a bonanza of cheap energy to the resource-starved nations, only to now sit afloat, while demand sinks and markets implode, and only one well-piloted, off-the-shelf drone need arrive to ignite the implosion into a fiery explosion, turning an unwanted asset into an insurance claim. With off-shore companies and hidden connections, shadow bankers and dark pools of cash stashed in black holes or under black rocks, the very real possibility emerges of the owners themselves having shunted the monies to the organisation that now claims credit for the act of sabotage. So then, would/could it be against the insurance company, not Chesapeake energy, that the subterfuge was directed?

While humans of the planet have been sloganeering about saving it, they were in fact saving something else. Or trying to. Now no one can remember why. A flight of stares, a magic car pet ride, ostentation nation while reality slides deeper into a trap of indenture they hope lacks teeth. But there's something afoot; something's amiss. The dreadful feeling that something's coming for you only gets stronger as one calamity is followed by another, one plan replaces another just in time for that plan to collapse too: Jit Disaster Capitalism.

There is something coming for you.

There were warnings. Signs. Not exactly what we refer to as omens, which are fanciful and arbitrarily divined, but signs posted as datapoints, concatenating catastrophes, population collapse in the midst of teeming oceans, or insect populations disappearing thereby decimating the ranks of their avian predators. A great healing was in order, but there's no time to stop the hemorrhaging to allow it to occur. But nature finds a way.

The microbe we have freed to ravage our species is a mere shadow, a fleeting moment of time during which we  have let loose a plague on ourselves that has undermined much of what we held dear; but a mere molecule that is just as invisible and that we have been instrumental in loosing upon the world  is just as dangerous to those innocent of any involvement in its release, even as we have mortgaged our future by pouring trillions of borrowed dollars into a bailout for the very industries that pour out billions of tons of this molecule to ensure the freedom of a few to live like kings while the masses are reduced to ashes in crematoria that turn even their corpses into a black cloud of noxious CO2.

While our Furor pulls pranks, telling his Reality Show fans to shoot up disinfectant, the movie Planet of the Humans comes out, wherein it is dutifully demonstrated that the wind farms and solar arrays we are being sold as "alternative energy" or "renewable fuel" are of the exact same nature. Yet the first Prank, that, "Climate Change is a Hoax", is still ignored: but both are delivered as distraction from our own active participation in our own demise. They are not just related; they are intertwined. Yet the one that is the least harmful, its idiocy so obvious it can be immediately discounted, is the one harped on and dragged through every news outlet to heap scorn onto, while the far more dangerous, and deeply-rooted, "Hoax" assertion continues to go unchallenged, even as the entire economy has been surreptitiously built around it.

It's as though the concept of injecting disinfectant were immediately adopted and the Defense Production Act invoked to assure supply and to manufacture needles for its injection. As a country, that is what we have done with the "Hoax" assertion: ramped up hydraulic fracturing, extolled LNG as the Future, flared an escalating amount of our gas supply into the troposphere, erected gigafactories to churn out millions more automobiles that will just add to the already billion vehicles jamming the fossil-fuel-dependent asphalt roadways, driveways, and sprawled across sidewalks built for pedestrians. Yet in the space of a couple of days, the moronic UV/disinfectant advise from the Furor was rescinded with the facile excuse that it was but a prank, whereas not a peep is heard about his "climate change is a hoax" stance; as though it were any less dangerous, ridiculous, or easily refuted by fact.

We set ourselves up for this, as is clear from NIH internal documents and cross-border crossings of dizzying numbers of people on a daily basis, now bringing unwanted microbes as well as what they were always bringing: unwanted Global Warming. Why can we stop everything to fight one calamity, but only increase the very economic activity that is the known cause of the other? (Building an entire Green infrastructure on top of the fossil fuel infrastructure does what it has to do: Increases CO2 production, because it pays it forward: you burn now what you HOPE to save in the future, a future that will, because of the Green Machine being hobbled together, have far, does already have far, more carbon in its air than it would have had had we just burnt through the stores of fossil fuels, which we are burning through now anyway, only at a faster pace precisely because of Green Energy).

The reason for such ersatz thinking is demonstrated to us each day by our Furor: Delusion.

The nonsense that Climate Change is a hoax is never attacked because the only solution we've come up with to counter it, Green Energy, is a cruel hoax as well.

Like the Republican and Democratic parties, they are purposely distorted Funhouse mirror reflections of one another: if one gets shattered, so does the other.

We watch DC's Daily Coronacircus because its Emcee is the embodiment of Folly, and folly is what the economy thrives on. Thus can the stock market and unemployment soar simultaneously, 35 millions without work, but the market roars ahead despite the economy collapsing beneath it. For even Folly needs energy, and energy feeds Power; more energy means more Power. And we are all, above all else, Power hungry, even when it drains our humanity of every ounce of compassion it once upon a time felt for the afflicted.

Posted by Robertlowrey.blogspot.com at 2:08 PM

Fed as Financier of Fraud

When the government so blatantly funds the banks that are using the cash to undermine the economy.

A Fool and Your Money are Soon Parted. 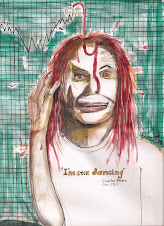 So-called Market Reform's let "entrepreneurs" engage in financial shenanigans that 'd been outlawed since the 30's. Then Greed was also stoked by arrogant know-it-alls. We've been GD2'd, Dude! 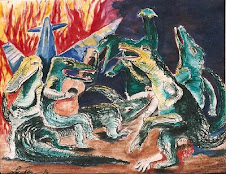 While the rest of us go under, the Barons continue to plunder: Goldman has set aside more than $11 billion in executive compensation.

Too much Crack and Cable.

Now there's no more fighting chance: we're out of dough, facing an unclear winter of discontent. 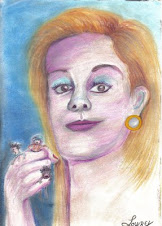 Send us your huddled masses longing to be squeezed...

The credit crunch'll eat your lunch....and your home...and your family... 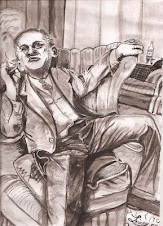 The Oligarchs steal your life's savings, the highly-paid government abets them and lights up a fattie. 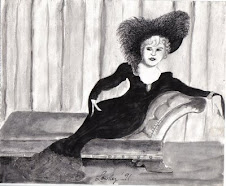 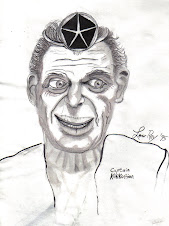 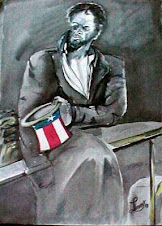 WSJ: "The earnings power of the banking industry has completely collapsed. Banks' earnings engines are broken, having shifted their business models to be based on fee income, derived from securitization, which is dead. 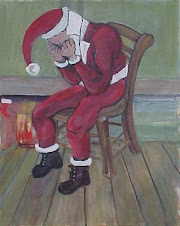 Pretending the Oil crisis Economic crisis, moral crisis and envirionmental crisis are unrelated brings disaster upon disaster, as the core reason gets ignored. Bernanke and Paulson, Rubin, Summers and Geithner: all fools. Arrogant monsters sustained by their own self-puffery.

Biting the hand that feeds Him. 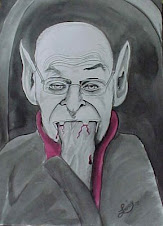 Paulson and his ilk of Nosferatu parasites. A boom and collapse similar to the one that ended the political career and presidency of George Bush also ended that of GW Bush

From all of those to whom you gave the same for 8 long years.

Result of the screed that greed is good. 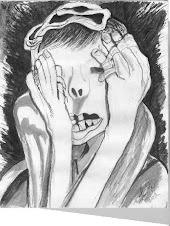 The "Milton the Monster" Friedmanitemare's visitation on those who literally asked for it: Amerikans

The hollow cost of suppressed dreams of revenge.

It's Ourway or it's Zimbabwe.

Benron Bernanke's Baleful Bailout has more holes than a SIV.

Fried Man Economix: Their Bubble, Your Toil, Our Trouble. 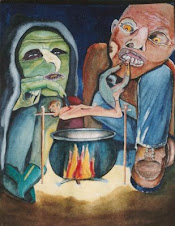 Benron and Appaulson have you just where they want you. 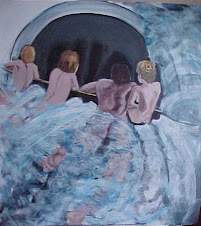 The Nation holds its breath as its economic Katrina leaves more and more of it underwater.

Confederacy of Dunces: the three stooges that screwed yas. 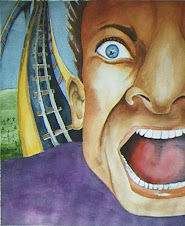 Every family of funds has its ups and downs.

Joyride while Running on empty 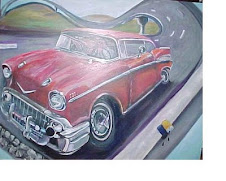 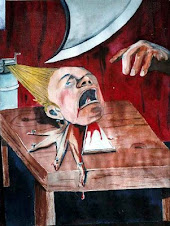 Going from the razor's edge to being put through the wringer. 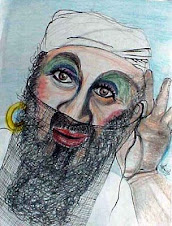 Looking for a meeting with Noah Veil 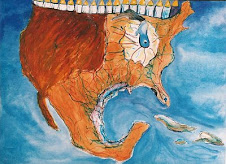 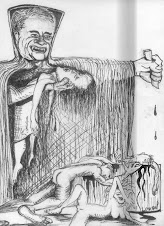 "So you think Your middleclass? War-Mart knows better." 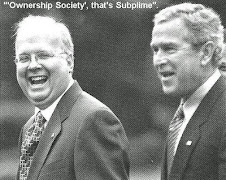 Hey, they knew we were snakes, before they voted us in.

If only McCain were Abel. 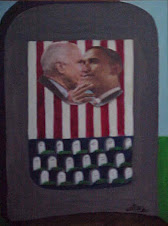 The candid date: "If you be Frank, I'll be Ernest." 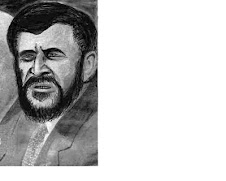 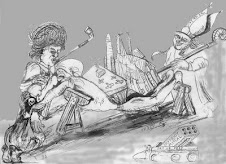 Breaking the back of the Economic engine: the Consumer. 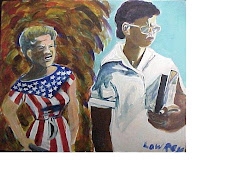 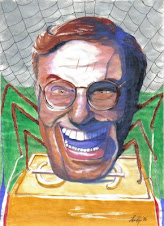 "There is plenty of liquidity out there even though a lot of it is frozen." Steve Forbes

Wolfe's at the door. 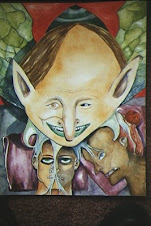 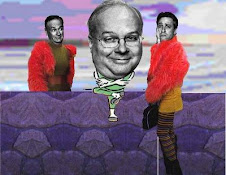 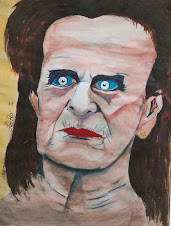 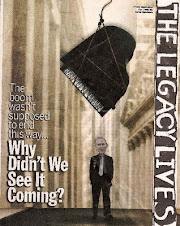 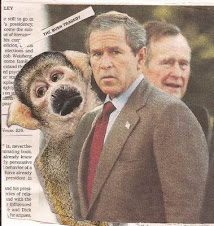 An amalgam of Anna Graham's work.